Avecasta has been object of two main acts of vandalism (1995 and 2012) which affected part of the archaeological contexts (surfaces, profiles and structures). Appart from the first campaign (1980-83), the programme intends to minimize (in a series of rescue operations) these unfortunate destructions

NOTE: Most of the following photo-illustrations are from the field campaigns twenty years ago 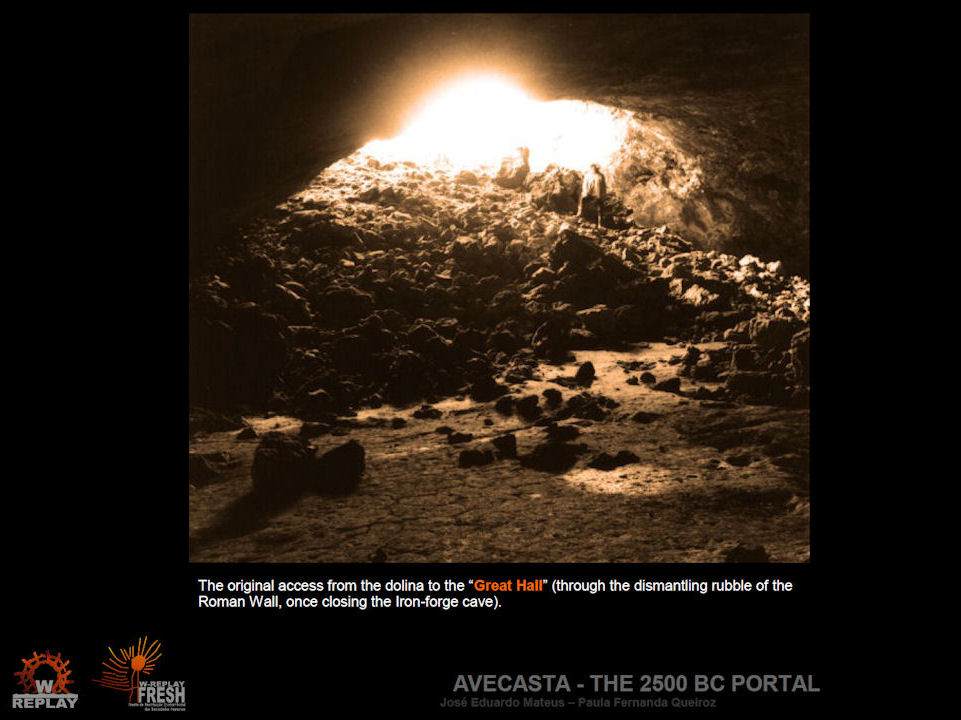 Taken advantage of the excellent preservation conditions of the overlapped Pre-Celtic villages and the artisanal Roman and medieval occupation (successively fossilized by clay layers inside the large Avecasta cave), this programme intends to enlarge the archaeological evidence and the scope of interpretation of the Ancient Territory Evolution in the Karstic Centre/West Landscape of Portugal.

The AVECASTA project (AveTIME) intends to dig deeper into the minute details of the preserved signals of this ancient settlements and at the same time to raise a virtual open platform to allow testing (replaying) alternative interpretation schemes to frame vivid scenic reconstructions of these societies in their functional and eco-territorial settings. A nested system of reconstructions holistically remaking the fragmentary evidence with differential levels of detail and verisimilitude will be aimed.

We want to promote the idea among students, residents, regional policy makers and general public that it is worth doing a detailed (time-consuming) multi-disciplinary investigation of the diverse “memory pools” well preserved in an archeo-site (such as Avecasta): New unpredictable gateways to the Human Past will be open allowing a much stronger and responsible engagement of our present day society with their ancient forgotten legacies. 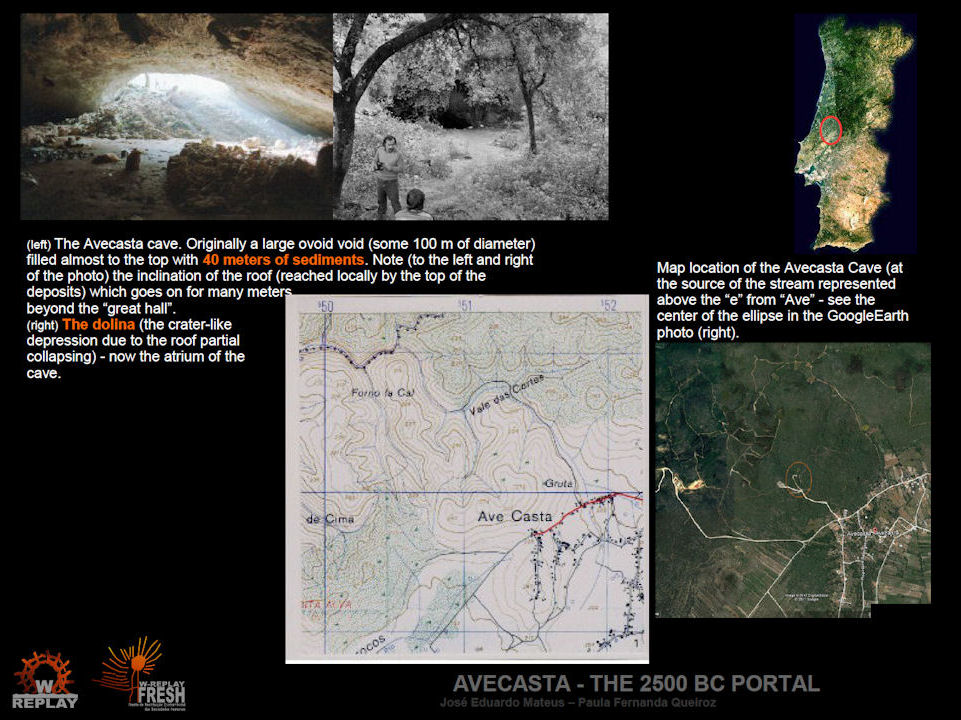 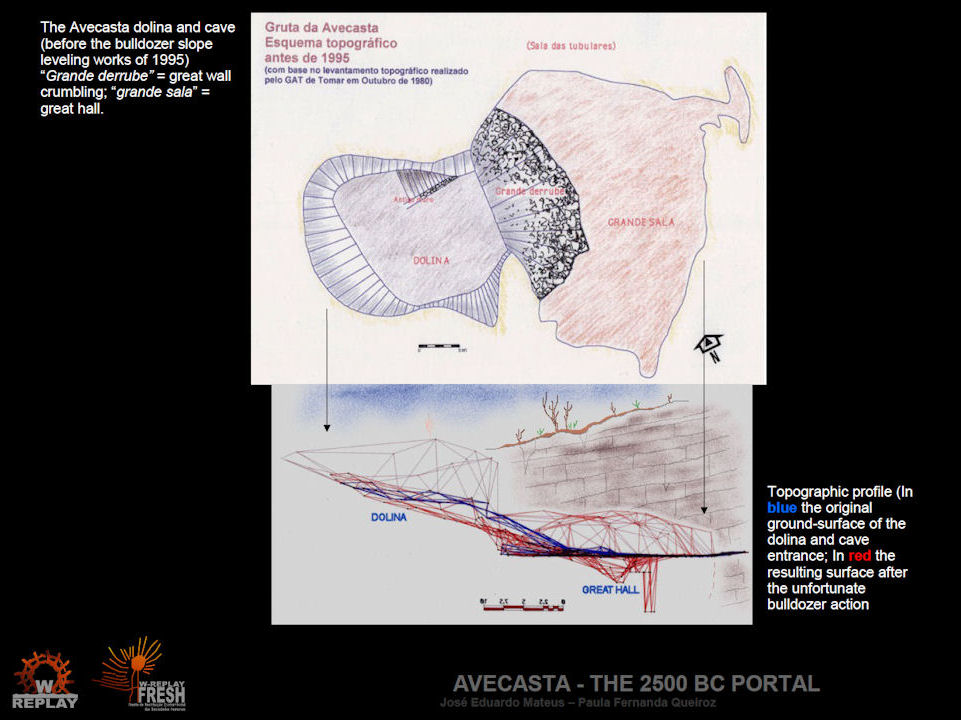 We identified the Avecasta Cave as a Prehistoric site in 1979. Hundred thousand years ago it would be a void in the limestone massif, some 100 meters in diameter. The roof partly collapsed creating a chimney allowing sediments to infill, and locally built (40 meters-tick) periglacial cryoclastic deposits to accumulate. With the end of the Ice Age temperate climates brought forests to secure the soils outside; The cave would then resemble a large saloon where (since Neolithic) man installed a village. Agriculture in the surroundings provoked the infilling of clay sealing successively the occupation horizons. The result is an unique site where the clay (as if lacustrine) preserves extraordinarily well the ancient occupational structures, remains and traces. The village flourished till the middle Bronze Age when an earthquake seems to have ended it. Occupation returned in the Iron Age; The Romans installed locally an iron forge; Today the cave is surrounded by a stratified holm oak forest (NATURA 2000 site) but during Late Prehistory (as shown by pollen) crop fields, pastures and ruderal prairies prevailed – a picture in accordance with the abundant domestic fauna from these archaeological horizons.

Avecasta Copper / Bronze Age settlements are of extraordinary importance due to the excellent preservation of their structures, artefactual and biological assemblages and geo-bio-chemistry traces. Metallurgical structures are omnipresent from the beginning of the Chalcolithic to the Late Roman Period, providing a opportunity for studying the evolution of metallurgy in a region traditionally associated with smiths (Ferreira do Zêzere means Ironsmith of the Zêzere). 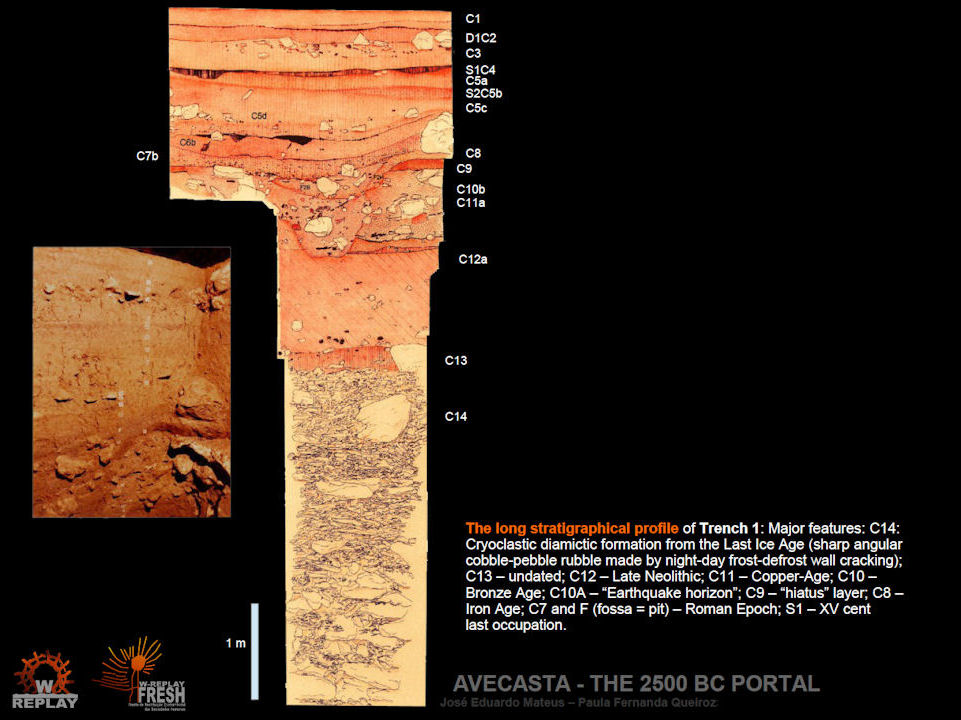 Most archaeological sites consist of structures and remains which were exposed by erosion on the top or slopes of the hills. These are easy to spot and to dismount giving place to huge artefact collections. Original living context of the findings often vanished most of the time – thus no need for detailed looks into this eroded past. Avecasta site is the opposite with its excellent signal preservation; It implies a meticulous archaeological dismounting through a long stratigraphy, thus, a synchronous view of particular settlement occupation horizon will take decades. In this sense the AVECASTA programme is especially valuable for its methodological and educational perspective - a vivid Portal of transdisciplinary archaeological research for disclosing and assessing the potential information this “eloquent portal to the Past” as to offer

AveTIME is a transdisciplinary project where (with the support of an international forum of contributors and users) archaeologists, (palaeo)ecologists and game developers join to develop new (widely replicable) integrative tools to foster richer experiences of the Past – such an international outreach and shared-development forums would benefit from global dissemination in the WEB.

Our innovative Virtual Contextual-Scenics Approach (VCSA) combines 5 dimensions of Culture – science, preservation, outreach, education and fruition; It goes beyond the isolated commitment of universities, science and art exhibition, museums, regional and central governance bodies. The imagetic character of the research and restitution claims for powerful and diverse communication platforms from local and regional to global scopes. Due to its complexity, the project aims QUALITY (accuracy, data calibration, large disciplinary scope, detailed complementary evidence) and not so much QUANTITY (affordable in “easy” sites).

Pragmatically the AVECASTA PORTAL will be a 1) FIELD LABORATORY, supporting a 2) SUMMER SCHOOL for advanced students, an 3) outreach VIRTUAL GATE, an 4) Experimental Archaeology Lab (ARCHAEO-STAGE) and 5) an FESTIVAL (spread in time) to instigate multi-vocational audiences. 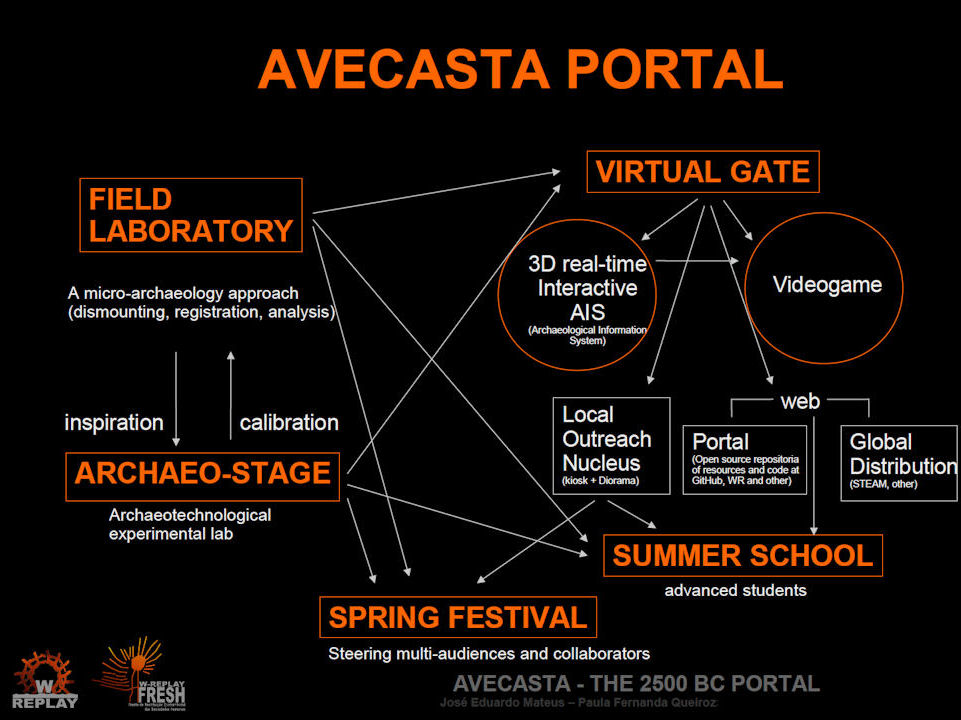 These lines sustain the LABORATORY, SCHOOL and testing STAGE.

A new “scenics approach” is assumed to enhance science and outreach in a generative connection. We intend to take virtualization of the a step further: 3D registration of the evidence will be re-approached under the concepts, libraries and programming modules of videogame scenes recreated on a “object oriented programming” perspective. The full access to the UNREAL (Epic) game-engine allows this subtasks to be exposed and co-worked at the “cloud” involving shared development of open-source resources and programming modules.

The digital AIS data-sets will be directly transposed into the virtual entities of the simulations (3 major topics):

1) The METALLURGICAL PROCESSES in the recovered pit-furnaces with their tools;

2) The DOMESTIC ORGANIZATION inside and outside the cave, their functional and social zonations, their dwelling activities;

These “local” virtualizations will be incorporated on broader scenic scheme: THE PROTO-CELTIC FOLK. 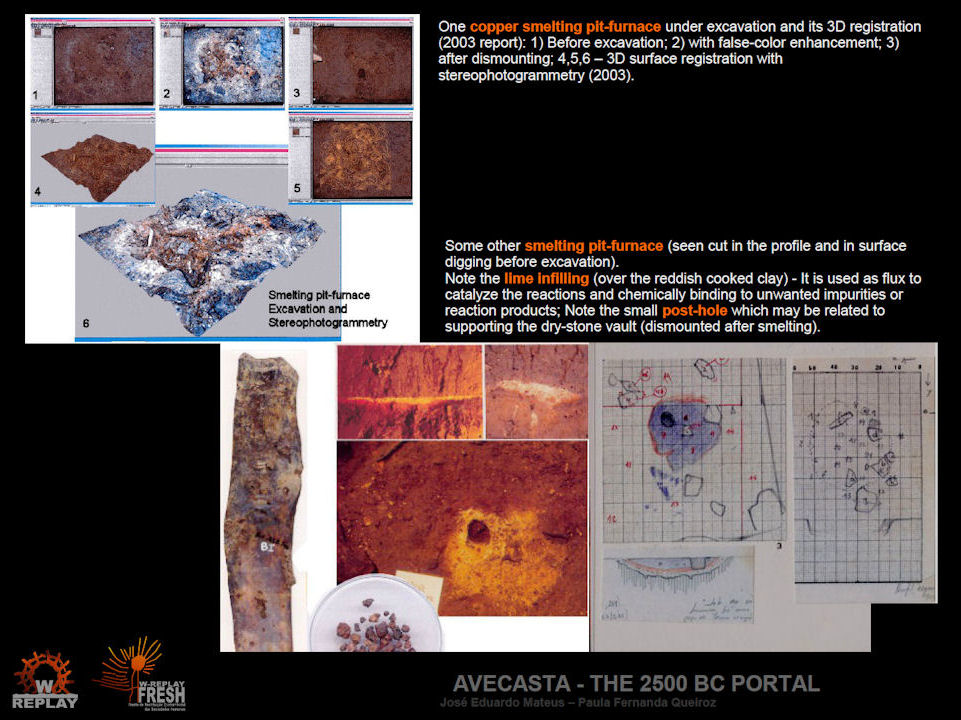 Although covering many centuries, AveTIME mainly revolves around the Copper / Bronze Age Epoch - a period (paralleling the present day) of accentuated territorial change and contact along a transect of European Atlantic coastal landscapes. This corresponds in Western Europe to the first moment where a strong (Bell-Beaker) acculturation wave (of remote Celtic character) travels from South to North linking remote cultural matrices and territories

Our AVECASTA Virtual Contextual-Scenics Replay (VCSR) tools do not concern simple Archaeology GIS for specialists but (out-of-the-box) videogame applications to be widely used. These allow rethinking, teaching and inspiring an effective re-appropriation of these Past legacies through a strongly emotive interactive engagement of residents and visitors. Apart from an INTERACTIVE REAL-TIME AIS the data-set gives place to an exploration adventure videogame, where the local evidence will be complemented (when lacking) with (archaeologically) realistic fiction and the importation of synchronous evidence from other sites from Centre-West Portugal and Atlantic Europe

To maximize a sound afterlife impact AVE will promote a cooperation network through the VIRTUAL GATE and the FESTIVAL. We will create international open forums on A) Virtual Museography; B) Archaeological thematic gaming; C) Ancient Territories; D) Copper-Bronze Age; E) IT-based Edutainment, which will engage audiences through cooperative open groups including: 1) territorial researchers (archaeologists, ecologists, ethnologists, art historians); 2) game developers and 3D asset creators; 3) Regional development, tourism and education agents; 4) Residents on ancient cultural landscapes; 5) Students. The annual FESTIVAL (to be held at Ferreira do Zêzere Cultural Centre and cave) will be an international event targeting the 5 audiences and will include 5 sections:

a) CONFERENCES (for science & development discussions covering the referred themes);

b) “ARENA” (gaming sessions for testing commercial, serious, experimental and indie games with a focus on Prehistory and Ancient Territories);

d) GALLERY (where the AVE TOOLS prototypes, deliverables and contributing datasets will be displayed, explained and tested);

The opportunity: This Summer we will enlarge the excavation area allowing a extensive access to the Copper-Bronze settlement, capable or revealing meaningful occupational patterns; We created the Double-u Replay (WR), an association of researchers and creatives which assembles specialists on most of the archaeo-sciences involved (soil micromorphology, sedimentology, palynology, plant macroremains, ceramics analysis, micro-fauna (invertebrata and vertebrata), bio-anthropology, provenance, wear and residues analysis), as well as on Virtual Heritage. WR is also engaged on experimental archaeology suited to reconstruct ancient technology and to communicate vividly and widely these results.

The Avecasta PORTAL digs into the Past but exposes its “making-off” at local and global scopes. It involves excavation but invests on a micro-archaeology perspective imposed by the excellent preservation (supported by 3D registration and virtualization). 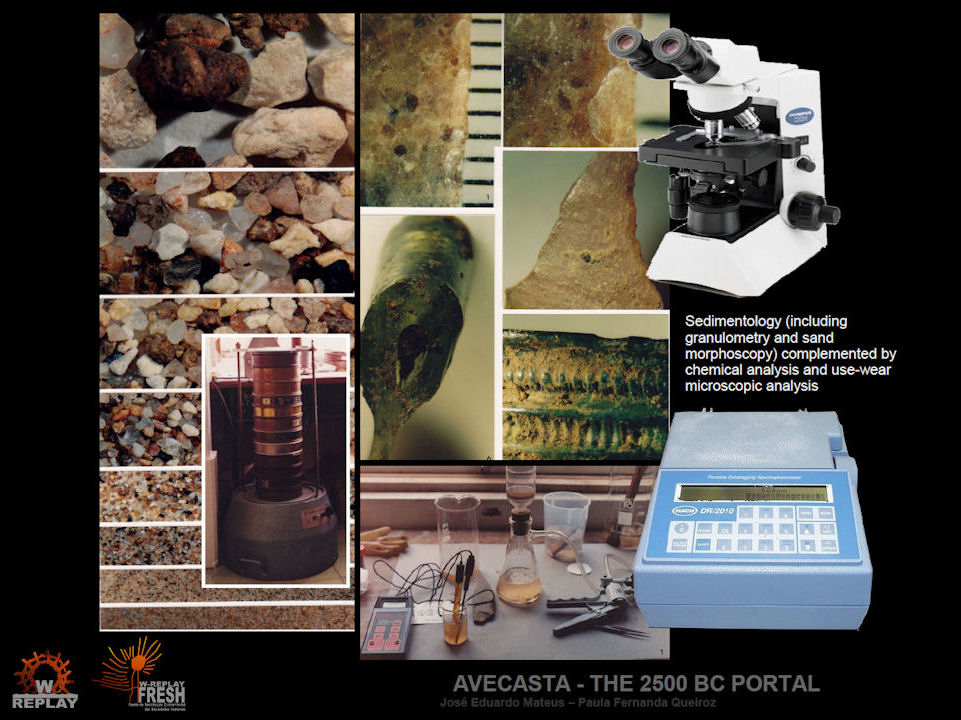 PALAEOECOLOGY to reveal the “minute microscopic reflections” of the landscape around the site through palynological and macro-palaeobotanical (and micro-faunal) analysis of a rich complementary set of sediment matrices in diverse contexts. The clayey matrices allow an easy recovery by sieving of organic inputs into the cave. 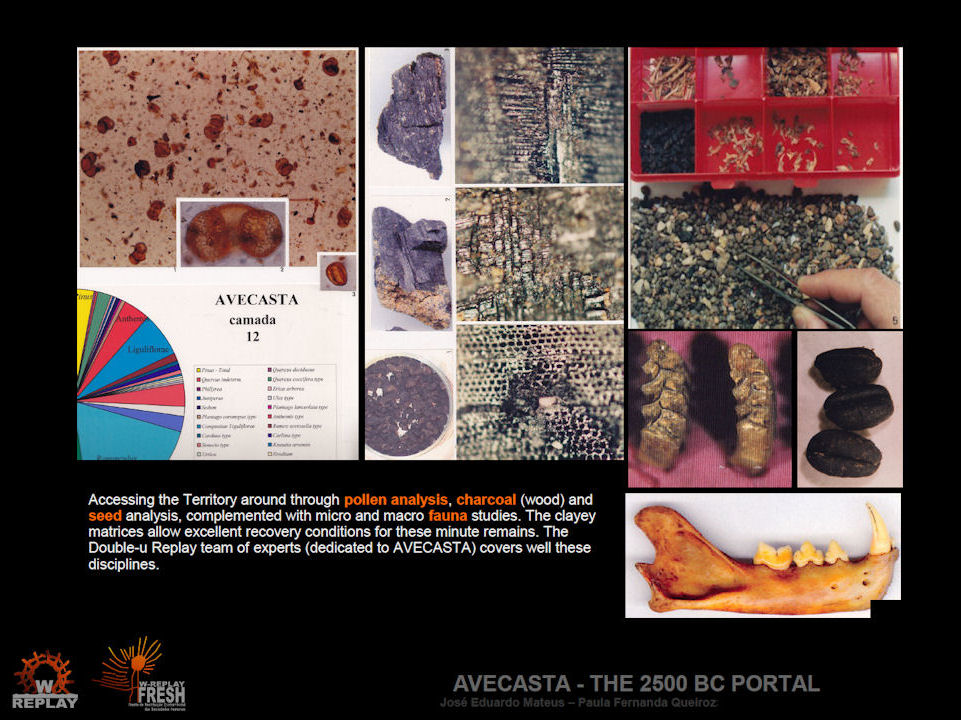 USE-WEAR AND ORGANIC RESIDUE ANALYSIS promise excellent results due to the optimal (uneroded and “eloquently dirty”) surfaces of objects; Organic Residue Analysis (inc. FTIR) will certainly contribute to decode the patterns of the village daily-life

PROVENANCE studies through the petrographic and geochemical analysis of the lithic and metal assemblages and the recognition of potential mineral sources in the region and beyond.

ARCHAEO-BIOANTHROPOLOGY – A multi-disciplinary focus on the (still rare) human bones. 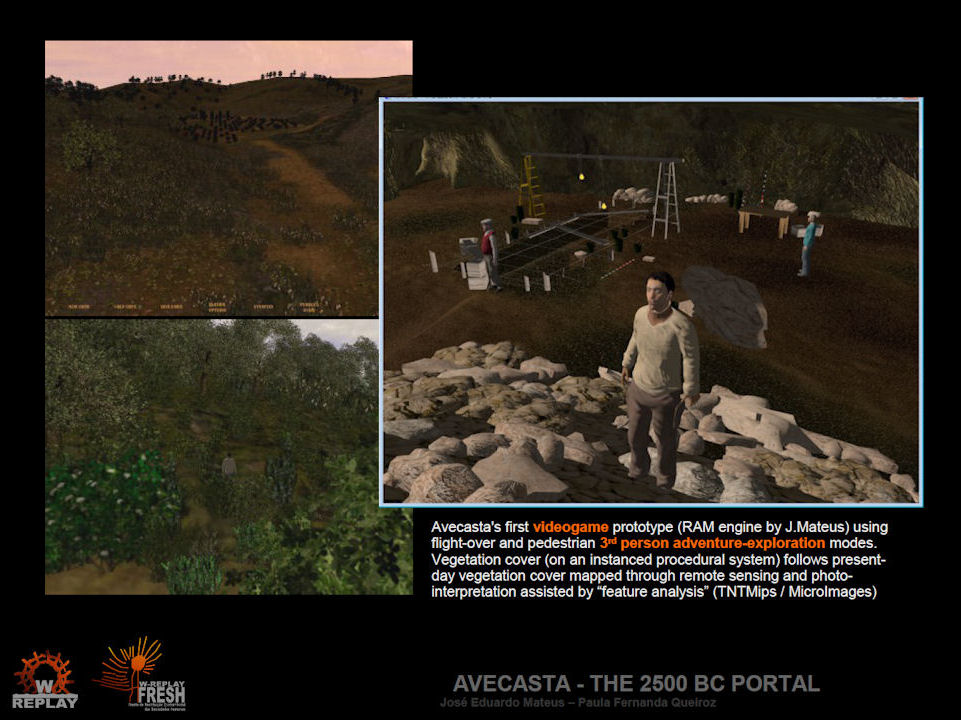 3D replicas of artefacts, structures, monuments and land-use features (via photogrammetry and synthetic modelling) will follow topologically (in its “edge-flow” design) meaningful technological, functional and ecological taxonomies and typological concepts. Every piece of legacy will be integrated in REPLAYABLE SCENES, to imbue context, meaning and integrity. This VCSR approach will enable the reappropriation of the Past in an intuitive, holistic and creative way, promoting a robust, participative and informed citizenship and simultaneously enhancing the explanatory potential of the research itself.

1) The AVECASTA PORTAL will give rise to a Site-Museum. First (2019) installed in at Ferreira do Zêzere, later on integrating (seasonally) a museographic nucleus inside the cave (after the installation of a multi-purpose metallic structure allowing the reconstruction of the original cave topography, the “underground” opening of excavation areas (accessed to visitors) and an exposition gallery).

2) The FIELD LABORATORY, the SUMMER SCHOOL and the ARCHAEO-STAGE will engage a sound group of international students each year;

3) The outreach VIRTUAL GATE (with multimedia kiosks and dioramas) will serve a local visiting audience but will engage in its on-line open forums a larger community of collaborators. In addition the previewed adventure-exploration videogame will be disseminated by on-line global videogame distributors targeting many users.

Part of the results will take the form of scientific papers on specialized journals.

At the GATE an extensive forum of researchers, conservationists, game developers and territorial-heritage stakeholders will be brought together with the support of dedicated WEB PORTALS, open-source digital DATA REPOSITORIES, and public multi-audience FESTIVALS to allow a fruitful collective creation and impact of the AVE TOOLS. These will populate museums, site interpretation centres and home computers. The FIELD LABORATORY and SUMMER SCHOOL are specially designed to train new scientists and technicians. The project values by its potential of future replication on other archaeological sites and museums.

Upon established and recognized AveTIME (field lab, summer school, gate, archaeo-stage, festival) will sustain itself as a permanent research and outreach programme. The on-going excavation, the teaching, the knowledge and resources transfer will be realistically expected. The future potential growth is huge: The excavation will never end (we are now considering digging less than 5% of its potential) increasing the thematic scope of the outreach applications and museographic settings. The research experience gathered along the years will increase and may extend in its global impact. Finally, after the museographic-structure installation the site will allow the “staging” of vivid performance events derived from the “Archaeo-Stage” sub-programme. 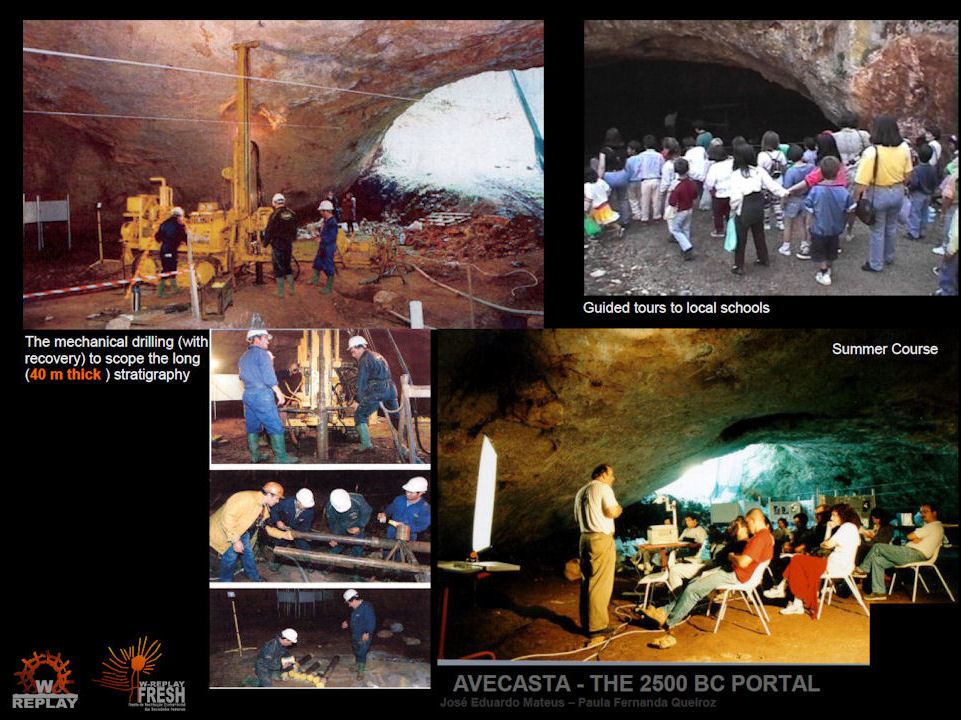